Highest Elevation: 7800 + ( total Elevation gain of almost 2000 feet with a few declines and then having to climb back up)

Trail Length:  According to the Park Map it is 8.8 miles roundtrip but my fitbit said we got 10.5 miles and every account of hiking the trail said it was 9 miles round trip.

Degree of Difficulty:  Moderate to difficult ( today we got an extra hard workout because of the snow) mostly due to length and incline

Bathrooms:  Yes, at the trailhead and then I assume there is one at the sawmill campsite and then at the west parking lot if you want to walk over there

Dogs:  Yes,  I think they are supposed to be on leash but none were so maybe not….

When I was thinking about today’s hike, I wanted to be realistic about how much snow we might encounter.  We actually got a little snow this week, not as much as we need but it is at least something and since we are so desperate for precipitation I will not complain at all about it.  Almost exactly a year ago I found this particular trail when my good friend Karin was telling me about how much she loved White Ranch Park and I looked up the open space to see what I could try there.  I was terrified by what I read about the Belcher Hill trail, the descriptions were all about how tough the incline was and how busy it was.  Lately I have been wondering how hard it really is and how much hype I have given it based on my physicality a year ago.  Since we got the snow I thought today was a good day to face my fears.

We LOVED it!  Yes, it is challenging in that it is pretty much a straight climb up over the length of 3-ish miles with a 1700 foot elevation gain.  But oh the views, they are just amazing!  I have been to this park a dozen times on the easier Rawhide trail and while there are some really spectacular views of Denver and the front range on that trail, it is nothing like what we saw today.  We could see Mt. Evans at one point and the sun perfectly highlighted all the beauty for us while we had some cloud cover overhead.

Ok let’s talk trail, we started from the East Parking lot for White Ranch Park  and it is surrounded by private land in fact we went through a few gates and crossed over someone’s driveway.  They had horses and the horses were given free reign, it was pretty cool.

The trail actually drops down and goes past some pretty amazing estates and so is surrounded by private property signs and barbed wire just to make sure you don’t go off trail.  It is pretty cool that these people let us go through or around their properties and enjoy the beauty they paid for… and paid a lot!

It was pretty snowy when we started, but fortunately there had been enough people before us that we had a solid path to follow and with no ice.  We really came at the right time as only a few people had stamped down the snow.  We continued down until we crossed over a short bridge and then the climbing began and never seemed to stop.  At first the snow was a non-issue:

We climbed for almost 2 miles before we started to hit the other trail junctions.  I have read that a lot of people opt to take the Sawmill or Mustang loops instead of doing the straight in, straight out of Belcher Hill, on today’s adventure we kinda understood why as the snow was way deeper on Belcher Hill.  At the same time there is an attraction in getting a full loop that we miss in doing straight in straight out.  We wanted the toughest workout we could get so it was all Belcher Hill all the way and the trail was so easy to follow.  Here are the trails we passed on our journey: 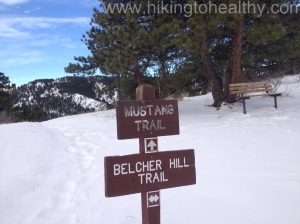 At the Sawhill Trailhead, the Belcher Hill Trail was almost lost in the snow and went down to a single track.  It was hard to see the trail in the picture but Aaron was nice enough to show us the way.  We weren’t sure how deep it got because no one had gone this way since at least the last snow.  We probably went in for a longer then we should have before we put on our gators to deal with all the snow but we were the one making all the tracks for those who followed, it was pretty awesome.

It doesn’t look too bad here, but we were mostly walking through snow that was half way to our knees a lot of the time.  It was a great workout and even better, I still felt strong through the toughest parts.  It was a really great hiking day for me. From here we climbed a lot more, higher than we have ever been in White Ranch Park and the views were breathtaking.  When we got the second crossing with the Mustang trail we started to descend to the West parking lot and the final stretch of the trail.

Initially our intention was to do this final stretch( just .4 miles according to the map) but all the snow traversing above had made us  a little nervous about our stamina and how we would fare on our way back, so we turned around at the West parking lot and headed back to the east parking lot.  On the return trip we encountered the most traffic of the day, I guess everyone was thinking later is better, lucky for us!

This is a great trail and while not at all popular when there is snow on the ground, I personally think it was the best possible time to be out on it.  From what I read getting ready to hike this trail, it sounds pretty busy in the summer/fall and mostly with bikers.  But today was almost perfect and very low traffic.  I know we will do this one again and again there was just something about getting to the highest point and the views we had of the surrounding mountains, I could live up there!  It also occurred to me while we were climbing away, we have managed to hike at least 44 out of the past 52 weeks.  It felt so good!  The weekend doesn’t feel right anymore unless I am out on a trail getting my Colorado mountain views fill.

This trail may be for the more hardy but all in all, it is so worth doing!  After the directions I will post our favorite pictures. 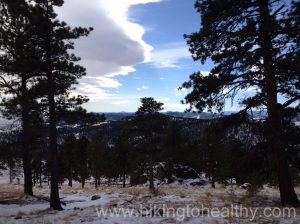 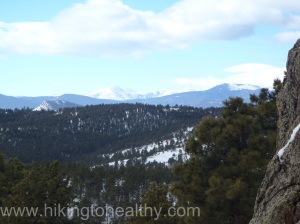 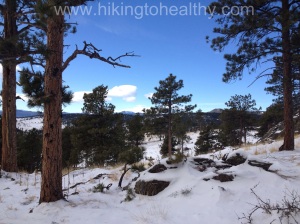 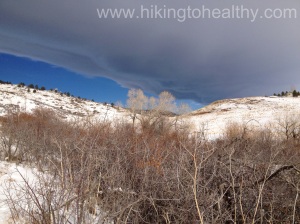