Degree of Difficulty:  Moderate to difficult Mostly because of elevation.

Bathroom: Yes in the parking lot

Being in that meadow behind Torrey’s(hike details here) last weekend made me want to keep seeing more amazing views.  I have had my eye on Herman Lake for a while, like 2 and half years kind of a while.  At first I was too nervous I couldn’t do it and then I was so focused on getting to a certain elevation each week that I kept skipping it.  I also know it is a really popular trail.  It is not overly long with a reasonable climb and astonishing views from almost every part of the hike.  Even starting at 7 AM, the parking lot was filling up fast and it is a big parking lot.   There are signs and a bathroom where the trail starts.

The first quarter-mile is a gentle climb to the T-section with a sign listing the trail options with an arrow.  Take the trail on the left.

The next mile was much steeper and rockier, the best part was when the stream came up along side the trail because it totally drowned out the noise from I 70.  This is one of the steepest parts of the hike.

After this initial climb, you come out into this meadow and really if we made it no further than this point it would have been enough.

The next 1-2 miles is through sections of pine and then beautiful meadows.  It was pretty muddy from this point forward with much of the trail an actual stream itself.   Last Saturday the snow was quite the obstacle, this morning more like scenery.

There were a couple of water crossings, some clearly are there normally some are only there when the snow is still crazy deep at the end of June.

When we got to the last set of pines we started the final climb up to the lake, it gets steep here, actually the most steep section of the whole hike plus it close 12,000 feet above sea level so just breathing is a work out. Last Saturday the snow was to our knees but hard packed because so many people had gone before us.  We met up with a gentleman who had been to the lake and he said the snow around the lake was hit or miss, some places to your knees some places chest high.  We lost the trail in here but just kept following other footprints until we saw the trail again.  This morning a lot of that snow had melted. We still lost the trail but it was much easier to find again after some obstacles.

The lake is supposed just half a mile from the last set of pines.  Unfortunately we didn’t make it on Saturday.  It turns out Aaron was working on a  decent inner ear infection and his head was to the about to explode point.  We had to turn around.

We could tell as we drove towards the hike Saturday morning that is had snowed in the mountains the night before.   Which is kind of surprising, but it made the hike extra muddy while also making everything in sight beautiful, like frosting.  I knew the trail would be crowded but I had no idea how popular it truly was, the nice thing is the path itself is mostly wide enough to pass easily so lots of people was no problem.

It turns out, I could not wait to get back and we went back this morning.  We cruised up and in, the trial was completely different that last weekend with probably a third of the snow and like a bazillion more flowers.  What a difference 6 days makes.  We were maybe a quarter of a mile from the final trail break before lake when we turned around last Saturday. This time we went left, it is not long to the lake and there was a super small pond on the way… it is not the lake.  Continue on Herman Lake is just ahead. 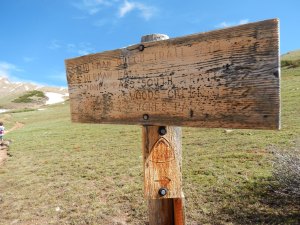 When we got to the lake, it was so rewarding. everywhere we looked it was spectacular.  There were still snow fields all over the place but getting around them were easy.  I kinda wish I we had seen it last weekend to have a good comparison.

We could have been done in 3 hours both times but we actually hung around taking pictures at every turn, spending 5 hours on the trail last Saturday and just over 4 hours today.  It was’t enough, there so much to see.   If you are ever in this area and you can only do one hike, do this hike there is not one boring part.  The whole thing was a series of ohhhhinng and ahhhing.

After the directions will be a few of my favorite pictures.

Directions:  Take I70 West and just before the Eisenhower tunnel, exit at the un-named exit #218.  Turn right at the end of the ramp, you will see the sign for Herman Gulch. 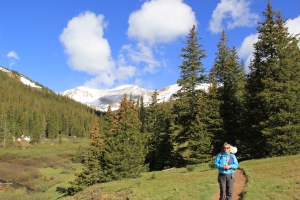 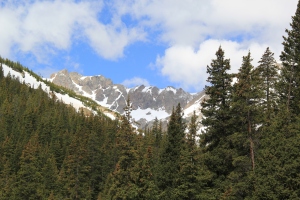