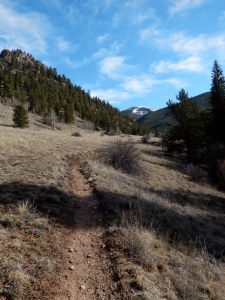 Degree of Difficulty:  Moderate to difficult, depending on how far you go

Bathrooms:  No, but there are 2 scary vault toilets along the road before you get to the trailhead, personally going outside would be easier….

Last week Burning Bear Trail made me fall in love with the area around Guanella Pass and the Mt. Evans Wilderness.  Three Mile Creek was another trail I had found late last year and it is in the same area so we headed out that way first thing Saturday morning.  The morning was absolutely perfect,  sunny with blue skies and the whole day was supposed to be that way with maybe some wind later in the afternoon. 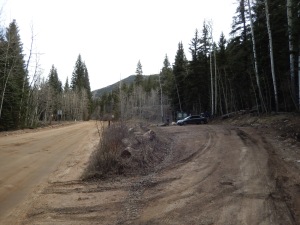 We started out and there was no snow or ice on the trail, it initially climbs just a little bit and goes along the road and then the creek.

I have to admit I was so excited in the beginning, I really thought we were going to make the whole trip with not too much snow. it was a nice steady climb through this stretch.

I had read that on this trail that as you go along the creek, it actually crosses over it 15-18 times in the first 3 miles, get to the first meadow and then climb on switchbacks up to the next Meadow where all the views are.

We made it over the creek about 6 of those times when the snow got to about 3-4 feet deep and while we had our snowshoes with us, the snow was getting so unstable from the warmth building throughout the morning that it was obvious at 2.6 miles in we weren’t getting in any further.

We turned around and just enjoyed what we could see of the trail.  We will for sure go here again and as soon as we can, maybe even backpacking here over the summer.  I had found out that this trail is considered a centennial trail, in that there is supposed to be a 100+different varieties of  flowers to be seen once the snow melts, that it has been written up a number of times.  That also means it is a busy trail during the summer and this summer promises to be epic for flowers given all the snow we have had.

At times we have made impulsive decisions that can be expensive, getting snowshoes was one of those.  We bought them from the Clymb for half the cost they would have been had we gone for this year’s versions and say I had gone for women’s versus men’s… but we got the adventure ones that are most useful for climbing mountains in the snow with backpacks on.  In total we spent $270 total with shipping and use of a coupon for 2 pairs of snowshoes.  This is how we figured we would pay them off; it costs $18-20 a day per person to rent snowshoes – each time we used our snowshoes we took $20 off what we paid.  We had hoped to have paid them off by the end of next season or spring of 2015.  This week was the 9th time we brought/used our snowshoes which means we paid off our snowshoes in just 3 months!  It is a stupid way of looking at things but it makes us happy, we did a little happy dance after our hike!

Not too many pictures from this hike so here’s how to get to this hike.

Directions: Take 285 from Bailey 10.8 miles to the town of Grant, turn right on to Park County Road 62( often referred to as Guanella Pass Road).  Drive 2.9 miles on the road and you will see the trailhead on right immediately before the Private property for the Next Mile signs.  It is a tiny parking lot so come early!