Trail Length:  Officially I saw everything from 9-10 miles, my fitbit said we went 11 miles but we did walk around the upper lake a lot.

Trail Uses:  hiker in all places and then horses in some….NO BIKES

Degree of difficulty:  Moderate to difficult mostly due to length and one scramble to Upper Chicago Lake.

Bathrooms:  1 Creepy one at the Echo Lake Picnic parking lot ( For some reason Denver County Mountain Park use the S shaped ones with no doors…..)

Pets:  Yes for dogs, I am not sure if a leash was required but we saw dog owners with dogs on leash and off.

I have been wanting to try this hike since April.  I had targeted as one of our conditioning hikes to get ready for our first 14er, but then we got those crazy snow storms throughout April and May which meant the trail was under many feet of snow when I originally wanted to attempt it.  When it was finally possible to hike it, it was mountain goat and sheep mating season and Park Rangers ask that you do not hike here in order to let the goats and sheep do their thing.   Which of course I respected since the poor animals deserve some peace while they mate.  We weren’t expecting to do these re-acclimating hikes, but since I was forced to get used to it all again I figured now was the perfect time to check them out.

I got to the trail head at 7AM and it was COLD, I guess fall is coming more quickly then I want.  I got bundled up and was even glad I had gloves on hand, as I think it was like 35 degrees at the start of our hike.

My suggestion is to park at the Echo Lake Picnic Area, as that is really close to the Chicago Lakes Trail which is the hardest part of the hike to actually find.  Since I followed the book suggestion and we got there insanely early, parking here was no problem( not a lot of parking spots here) but you can park all around the Lake and at the Echo Lake Lodge.  The trail head is a little off the Lake Path on the Southwest side of the Echo Lake.

Not long after you get on the official trail, you immediately descend about 3-400 feet and cross over the Chicago Creek.  Portions of this descent will challenge those who may  have “issues” with heights as the Switchback initially is very close to the a nice steep drop off.  It also gives great views of your final destination and Mt. Evans.  It was a beautiful view to have while heading down.

From this point forward the trail is very well-marked, you take an access road up for about a mile, past the Idaho Springs Reservoir.  I have to admit during my research for the hike, I was worried about this road section but actually it’s fine and looks more like a wide path then road.  They are doing some type of maintenance by the Reservoir but on a weekend there was nothing to see but the equipment.

As we crossed over to the Mt. Evans Wilderness, the trail went back to single track and starts climbing more aggressively through an old burn scar from a fire in the 70’s. As it flattened out for a short stretch, the wild flowers were everywhere and the views of mountains on either side of us was pretty amazing. 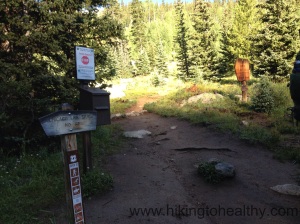 I am always surprised at how beautiful a burn scar is as it ages.  All the below are from that burn scar. 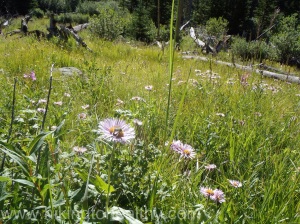 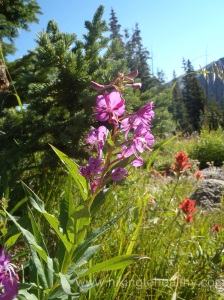 As we came up to the lower Chicago lake, outside of the obvious beauty, we were enchanted by how dense the brush was on either side of the trail and how moist everything was.  We also started descending again and there was more and more mud with standing water on the trail.

This was also a little tricky through here as I knew we had to stay right on the trail to get to the upper Chicago Lake and since we were heading down through such dense coverage, I was certain we missed the turn off.  We came to this huge boulder and thought maybe this is where we go right but it wasn’t.

In fact, it isn’t really until we started climbing out of the dense tree/bush coverage,  that we came to the trail going off left to lower Chicago Lake and we stayed right to climb to upper Chicago Lake.

This last climb does require some scrambling but nothing too bad, we did put away our poles so that we could use our hands freely. 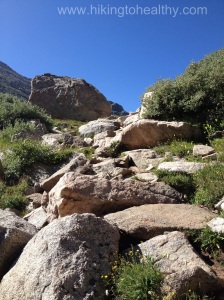 Upon cresting the final lip of the scramble, the upper Chicago lake was spread out below us.  It was spectacular!  It took us about 2.5 hours to get there and we ended up sitting around taking pictures while snacking for almost an hour.  Plus we were fascinated with the people climbing up to Summit Lake and possibly Mt. Evans (14er) as this is also the crazy long route ( 14-16 miles round trip) to summit Mt. Evans, on the south side of the lake.  It looked really steep and as the wind picked up we saw the little group slow down quite a bit.

This is an in and back hike, the first one where my books said it would take longer on the trip back then it does on the trip there.   There were a couple of reasons we took longer on our way back, that scramble to the upper lake is actually pretty steep and we took our time getting down it, then the last .8 miles is straight up 3-400 vertical feet up a single track trail that is heavily used. It did take us almost 3 hours to get back.

Also the trail started getting pretty busy on the way back with like 50 back packers coming in to camp by the lakes for the night, among a bunch of regular hikers.  It made us very jealous as camping up there must be so lovely!  It was even more busy between the Mt. Evans Wilderness boundary and the start of the hike with people picnicking by Echo Lake looking for some pre- Picnic exercise.  Overall it was a beautiful hike and again renewed my love of hiking and Colorado!  If you ever have the chance, please check this one out, it is worth the effort!  After the directions to the trail head will my favorite pictures

From I-70, exit #240 and head south on HWY 103 (toward Mt Evans) for 13 miles to Echo Lake. Turn right at the Echo Lake Picnic Area, down the first dirt road on your right and continue .25 miles to the parking area. 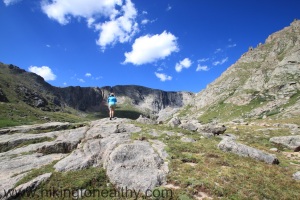 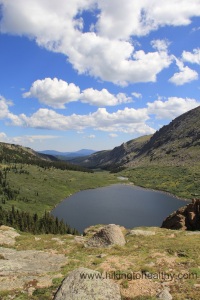 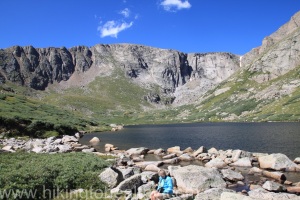