This week has been tough on so many levels for so many reasons and I know I am not the only one struggling to find balance and meaning.  I can tell you that the only thing on our minds yesterday was getting out hiking and getting as high as we could (altitude wise of course), but with all the snow we got this week any hike was going to be challenging so we decided that it was going to be Bergen Peak …..again  Details of the Hike here

Honestly, I was not optimistic about our hike yesterday but we figured let’s get all our stuff together and go as far as can.  A pie in the sky hike would be to do the exact same hike we did here 2 weeks ago ( Details here), 13.5 ish miles in 6 hours with around 2400ft ish total elevation gain.  The storm that hit us this past week dropped around 2 feet of snow on Bergen Peak AND we had a chance of rain later sometime this afternoon.  All I wanted was a good hike that would help us to keep moving towards a 14er this summer.  We started out slightly bundled up, gators on for high snow with actual hiking boots (not usual and decidedly heavier) and prepared for every thing the mountains have to offer.  What we got was surprising, the snow was deep and every where but at first it was easier to move through and at just a little over half of a mile  We saw our first herd of elk 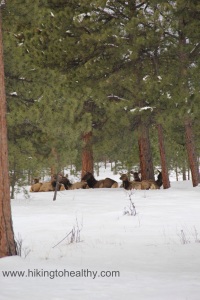 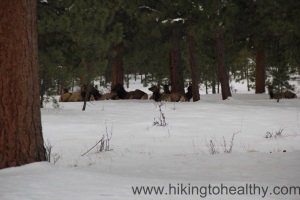 After 7 years of living here we finally saw our first Elk!!! It was so super cool and we were crazy excited to see them….I even pulled out my big camera which I feel like I only carry for weight building lately.  None of the pictures turned out as good as I wanted them to be but I can tell you it was awesome!!!!

We started out really slow and as we climbed up I figured  if it takes the whole day, then it takes the whole day just as long as we finished before the rain was predicted to start at 4…did I mention we started hiking at 7:30?  At that early in the morning the snow was perfect to walk on, but other than the occasional  slide it wasn’t too bad and there had been enough people before us to create a very nice path.  The traffic on the trail was really light going up we saw one other couple hiking and then one jogger.  That jogger told us he spooked a bear about a 1/2 mile up the summit trail, our pace became slower and we were super attentive, stopping for any little noise.  I was really torn here, scared to see my first bear and yet wondering if I could catch one in a picture.  We then had the good luck of meeting up with another hiker who had just gone up to the summit and she saw no bears so we continued on.  Here are a couple of pictures of what the trail looked like on our way up: 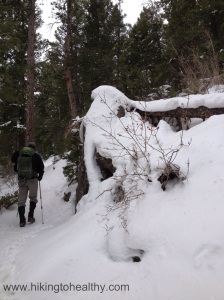 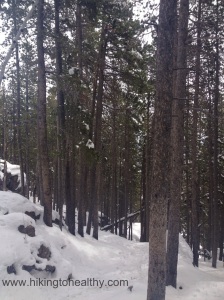 It was a beautiful day and crazy challenging, it was like walking up and down sand dunes with lead weights on our ankles and back.  In the end it took us 4 hours to get to the top, which was covered with so much snow and I only fell once, thank goodness for all that snow it totally made my face plant more funny than painful.  We don’t know this trail enough to walk where there weren’t already foot prints and so I was challenged in getting any good shots of Mt. Evans at the top but Pike’s peak was AMAZING!!!!  When we were about to leave another hiker had just arrived and he was so nice, but he told us something new and embarrassing. Before today we always stopped at the vista point assuming it was the summit, but in fact it is not so he showed us where it was and took a picture of us so we had actual proof we made it to the summit.   What a funny lesson for us, I was such a proud hiker until that moment!

In the end we did just under 12 miles even thought my fitbit said 14, we are crazy insane tired like my joints have never hurt so much tired and my calves have been aching.  The day was beautiful and different I couldn’t get enough of it all.  I am in love with this particular hike and most times it is pretty crowded but yesterday we had almost the whole thing to ourselves.  Most hikers who actually attempted the peak did the standard route up and back ( Sleepy S > Elk Meadow> Bergen Peak Trail > Summit Trail), we decided to do the loop via Too Long down from the summit trail and just enjoyed the complete solitude.  By the time we headed down the snow was starting to get slushy and slidey, I took the advice I received from Didier when I did White Ranch Park with my nieces last month and took a lot of small steps it helped so much!!!  I still had sore feet but no blistering like I did then…..

Here are some of our favorite pictures from the hike: 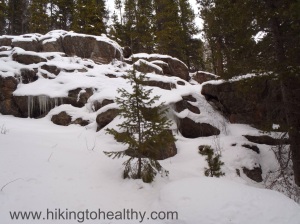 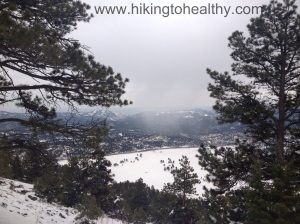 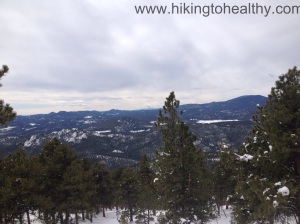 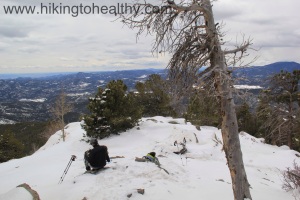